Stéphane Saves the Starter (and the day)

Sometimes the engine starts right up and sometimes…well, it doesn’t. So our new routine is Stéphane tapping the starter with a screw driver while I try to start the engine in the cockpit – that was working well enough for us until Compass Cay.

In Compass Cay, this new technique did NOT work but luckily our buddy David was able to jump-start the Perkins so we could make it to Staniel Cay.

After Da Race (New Year’s Day Cruiser’s Regatta), the starter finally gave up the ghost. it would not start up. Period. Done. I suppose you can only whack a starter so many times with a screw driver before it completely gives out.

So, it’s back to “fixing the boat in exotic locations”.

How does one find a starter in the middle of nowhere? Step 1: get on the VHF and ask. Most everyone on Staniel Cay and all the cruisers have a VHF and monitor channel 16 all day long. So, we ask if anyone has a spare starter for a Perkins 4-108 that they are willing to let go of (long shot).

Although we were unable to procure one, I could not believe the number of cruisers who checked in with us to see how things were going:

Can we stop by and help out? Need a second pair of eyes?

Do you need any tools?

Do you need a tow?

How’s it going now? Just checking back in. We’re in Black Point and we found a Yanmar starter, but I think you have a Perkins, right?

While having a broken engine is kind of a vulnerable feeling, knowing that a whole family of boaters have your back? Pretty amazing, I must say.

So, it’s a Sunday. We are going to order a new starter the next day and have it flown out from Ft. Lauderdale to Staniel Cay (can you say markup?). Stéphane decides he needs to trouble-shoot the stater one more time, just in case there’s something he missed. He finds a video on YouTube on how to test a starter to see if it is truly dead or not. An hour later, the starter is sitting on the floor of our cockpit hooked up to our starting battery. He performs the test on the required two different parts of the starter and… 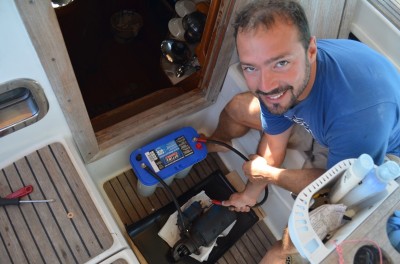 We have a starter!

The issue is not the starter itself, so we can now rule that out. So what’s wrong? I had Stéphane type this up because while most of you won’t care, I know a few of you will want to know since you asked about the Perkins before when we almost blew it up.

So, here’s the techie stuff from Stéphane:

I also disconnected the wire from the ground terminal in the electrical compartment and made sure this connection was clean too. I tested the ground wire with an ohm meter to test the conductivity of it and make sure the cable was not showing a high resistance

Long story short, Stéphane saved the starter! After an hour or so of work, the starter is back in and we cross our fingers as we start up the engine. And it starts. It’s the most lovely sound we’ve heard in a long time. What a relief. We are back in the saddle and ready to keep cruising!! 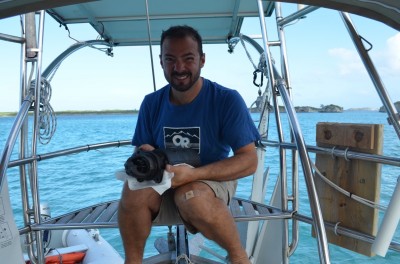 Stéphane with the infamous starter (and a bloody knee, probably from the race the day before).