Although all the real major refitting was done on Free Range before leaving Oriental, there’s ALWAYS little projects that need to be done along the way.

The other day we found ourselves anchored at Redhook – an anchorage on the east coast of St. Thomas – because our buddy boat had broken his forestay. Within walking distance of Redhook we discovered a boatyard!!! Boatyards are awesome because they offer parts, supplies, carpenters, mechanics, tools – anything you can think of to fix your boat – it’s probably at a boatyard.

Anyways, boatyard proximity means we can fix the cockpit shower door that one of us stepped on a month or so ago (not me!!). 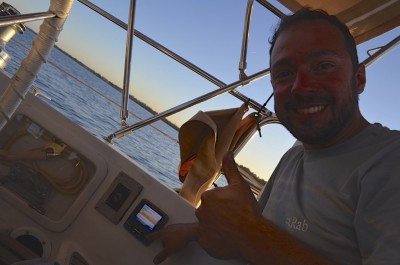 I couldn’t find a very good “before” picture, but this gives you an idea. We have a freshwater shower in the cockpit (it’s awesome to shower in the cockpit provided there are no peeping toms lurking about). The shower has a little plexiglass door on hinges. Well, Stéphane accidentally stepped on it when it was open and cracked it pretty good. So we’ve been wanting to fix it but haven’t had the resources to do so…until the boatyard! 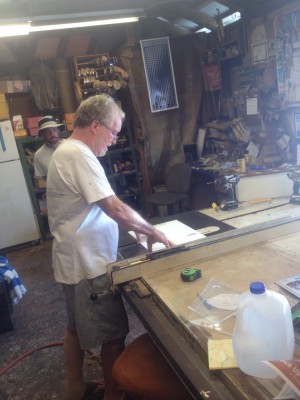 We had a choice between plexiglass (see-through) and this other material (not see-through). I wanted the plexiglass but then thought maybe it would look better to “hide” the shower…Anyways, we went with the non-see-through material. Here we are at the carpentry shop at the boatyard. 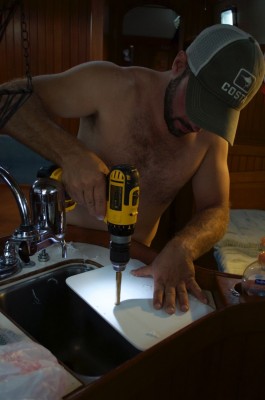 The carpenter guy didn’t have time to round the edges or make the hole in the door. No problem! Stéphane broke out the tools and made it happen. 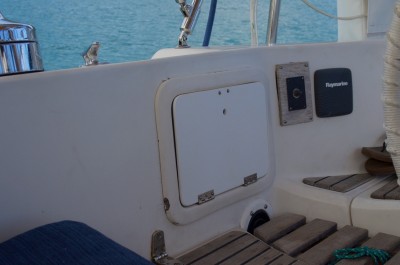 Here’s the after. We need a bigger drill bit to make the hole just a little bigger so it’s easier to open. I kind of wish we’d gone with the plexiglass because the white door doesn’t match the white of the cockpit. It’s really not a big deal but little things like that bug me!! Oh well, it’ll do!! 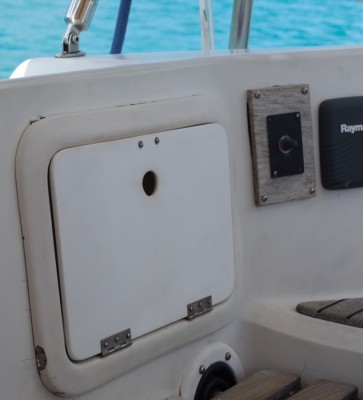