We’ve heard stories of people taking a bus ten miles to a Walmart, buying food and supplies for many months, having to catch a cab back then shlepping bag upon bag of groceries from street to dock to dinghy to boat. That’s a lot going on.

So when we found the St. Augustine Town Dock – free for a day – and the Publix grocery store – three short blocks away – we thought: PERFECT PROVISIONING SCENARIO – let’s do this! 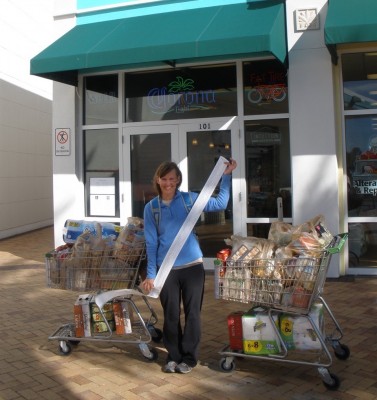 They day before Thanksgiving, we hit Publix like it was going out of style. They will speak of us in years to come; we were legendary. Officially the longest receipt ever printed at the Vilano Beach Town Center Publix (“After Mr. Thorncrest”, said the guy who checked us out).

Because everything is so much more expensive in the Bahamas, cruisers stock up on paper products, and canned foods before they head across the Gulf Stream. For example, a case of beer can cost you upwards of $60 in the Bahamas (thankfully we don’t like beer *that* much).

So now we have toilet paper, paper towel, cans upon cans of veggies, fruit, and meat; pasta and sauce until the cows come home. 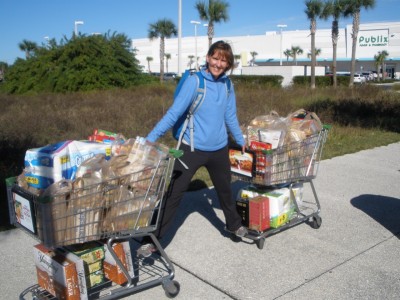 We had way too much fun with our newly-purchased provisions, racing the carts down the street and posing for photos. People we were definitely wondering why two grown adults were so excited about toilet paper, vinegar, and canned chicken. 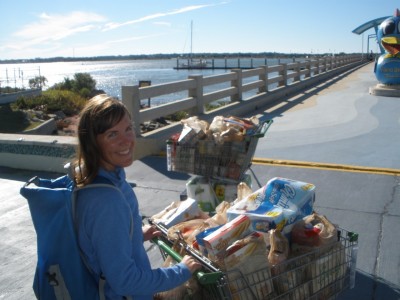 Vilano Beach Pier – Free Range on the free dock in the background. 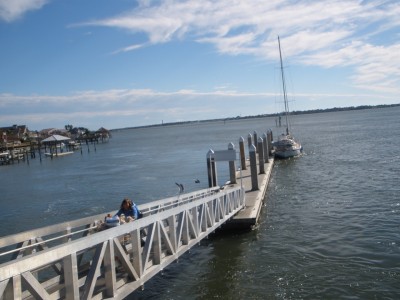 Backing the carts down the ramp to the dock. Hard to tell from this angle but the ramp was pretty steep. We achieved our goal of “no food left behind” (i.e., dropped from cart, fallen in the river).

It took another hour to get all of the food de-trashified (removing all the plastic and/or cardboard that we could to lessen the weight and trash we bring aboard), then more time to organize and pack and shift other things around in Free Range to accommodate all the new stuff.

Our first major provisioning trip was a success!

(and yes, we did return the carts!)