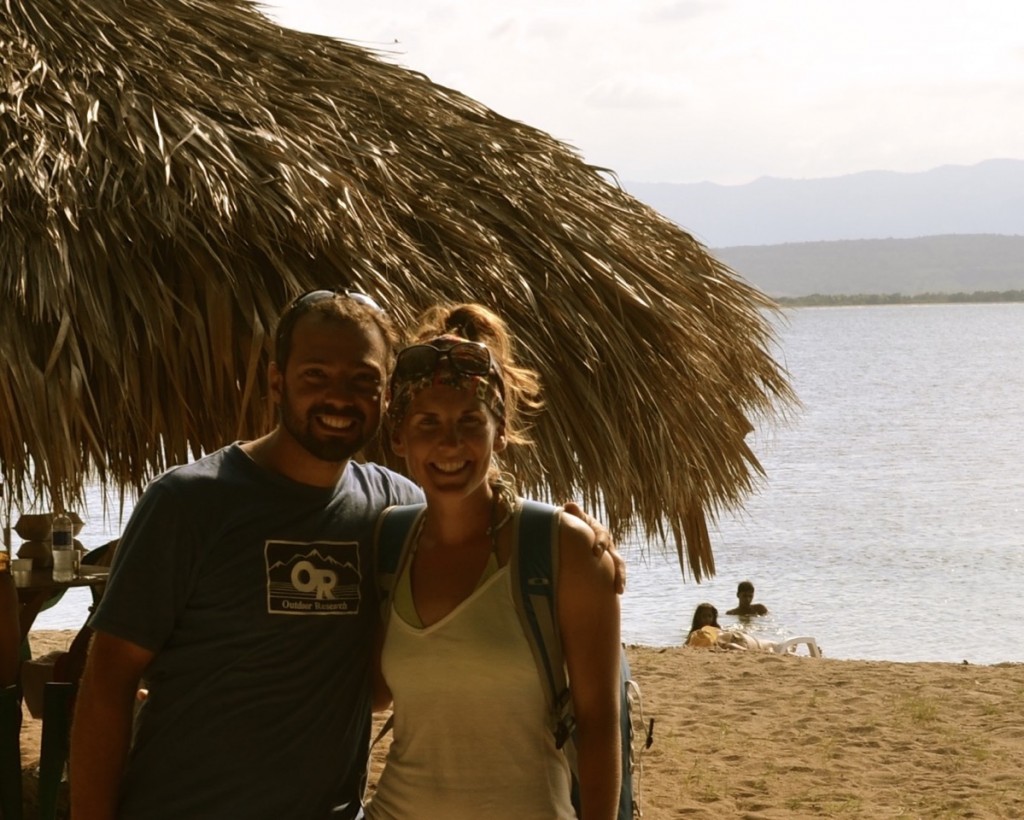 The countryside around Luperon is beautiful: lush, green mountains, waves exploding against craggy cliffs; the people are kind but oh-so poor. Everyone wears US baseball hats, basketball jerseys; Ambercrombie and Fitch and Old Navy shirts.

The Dominican Republic is completely different from the Bahamas: it’s not about the water anymore – it’s about the people and the land, so that’s what we are exploring. Stéphane and I and our buddy boat friends Bob, Judy and Steve rented motorcycles for 500 pesos ($12) and sped around part of the island. Along the way we picked different places to stop and grab beers. For lunch we discovered some roadside food (rice and beans, fried plantains and chicken, salad) – excellent grub.

Cruising along a dirt road, dodging cows and potholes, we come upon a large, lime green building pumping out the music and the Grande Presidents (beers). As we pull in, we see a small, round hut labeled “Cock Fighting” and another, larger building where a group of men lounge in white plastic chairs in one corner; they are eyeing the smiling women who are huddled in white plastic chairs in another corner – middle school dance, anyone?

The music was spicy and loud and made you want to dance. So I did and that made the men laugh and clap. I learned a few Dominican moves too!

Then we learned that we were not in a bar but, rather, a brothel (“ranchero”)! The “main guy” tried to sell one of the women to our friend Steve, $20 for two hours!!!! What a different world…So we finished our beers and took off.

After the ranchero, we visited the old church in San Isabello, then checked out a Dominican beach. It was Sunday so everyone was off work.

The beach scene is interesting – there are little grass tiki huts that sell pizza and beers, and then smaller tiki huts where people can sit and eat and drink in the shade. Kids play on the beach, collecting sea urchins. Groups of Dominicans sit around their domino tables, grande President beers, sweating, wrapped in napkins; large speakers rest atop car roofs, music blaring. Each group competes with its neighbor for loudest music.

In general, Luperon is just plain loud. Little trucks drive down the roads with speakers in the back, music cranked up or someone is blabbing about politics over a loudspeaker. Scrawny dogs rove around the streets and bark, motorcycles backfiring and whining at all different decibels, horns honking (Dominicans don’t use the horn like we do, they use it for, like, everything. They honk to pass, they honk to say hi, they honk if you are in the way. They honk for just about everything). Then you have the little bars every other block, each playing their music as loud as they can.