Up in the Clouds

Summer has arrived: the time that we were told was so beautiful and perfect; the season that made the windy, bone-chilling, gray winters and rainy, muddy springs all worth it. It’s the time of blue skies, fresh lobster, outdoor concerts on the river, increased road traffic from tourists, ninety degree, 100% humidity days, and… 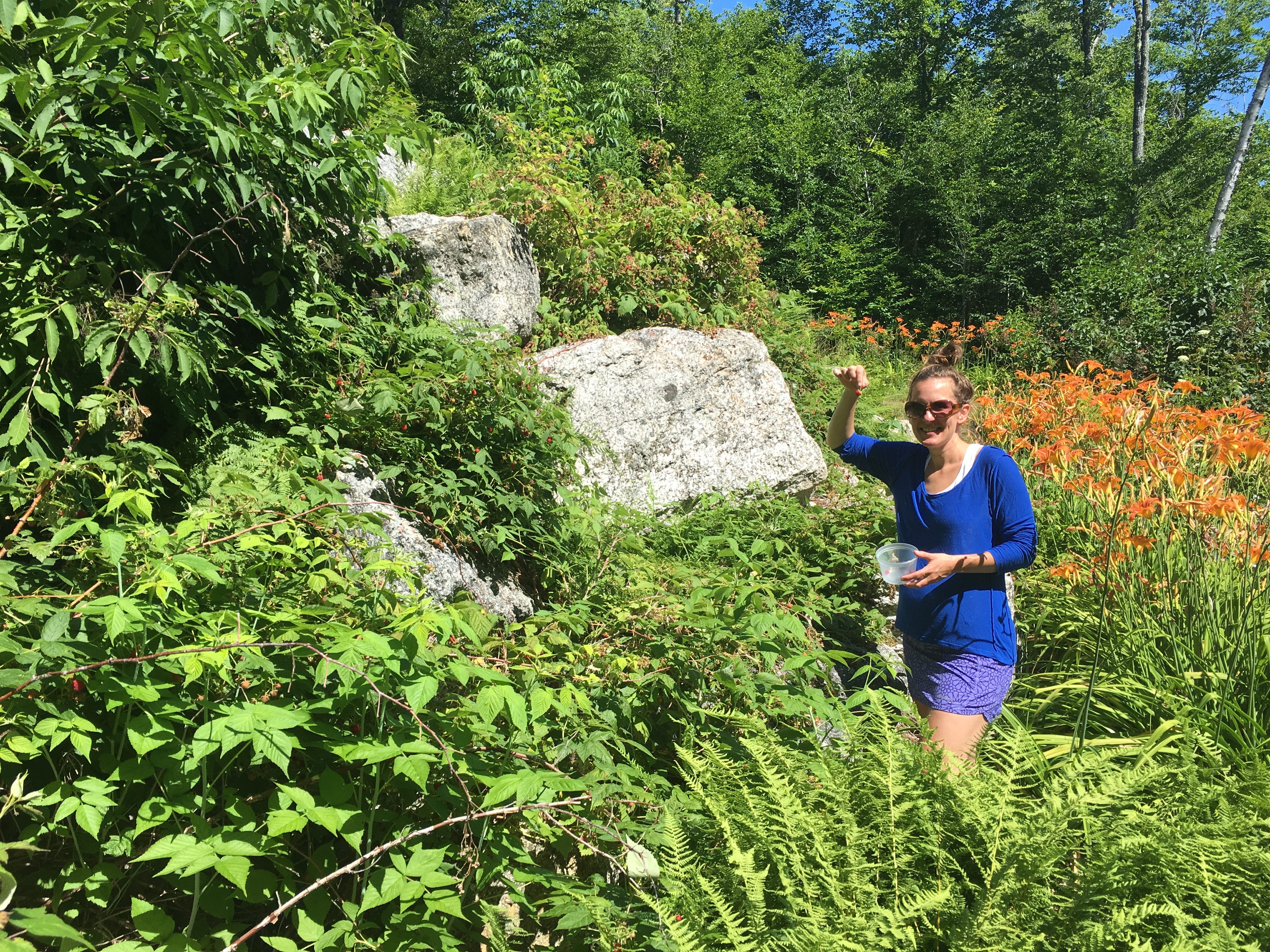 Picking wild raspberries in the front yard (long sleeves help a little with the bugs).

As I sit on the deck, reclined in one of our red plastic Adironack chairs, swatting at horseflies and batting away gnats and mosquitoes, I wonder if Maine summers live up to the hype and if they truly tip the scales, making it  worth living here the rest of the year. While it was another hot and humid day, at least the evenings bring some relief from the heat, if not from the relentless irritation of bugs. 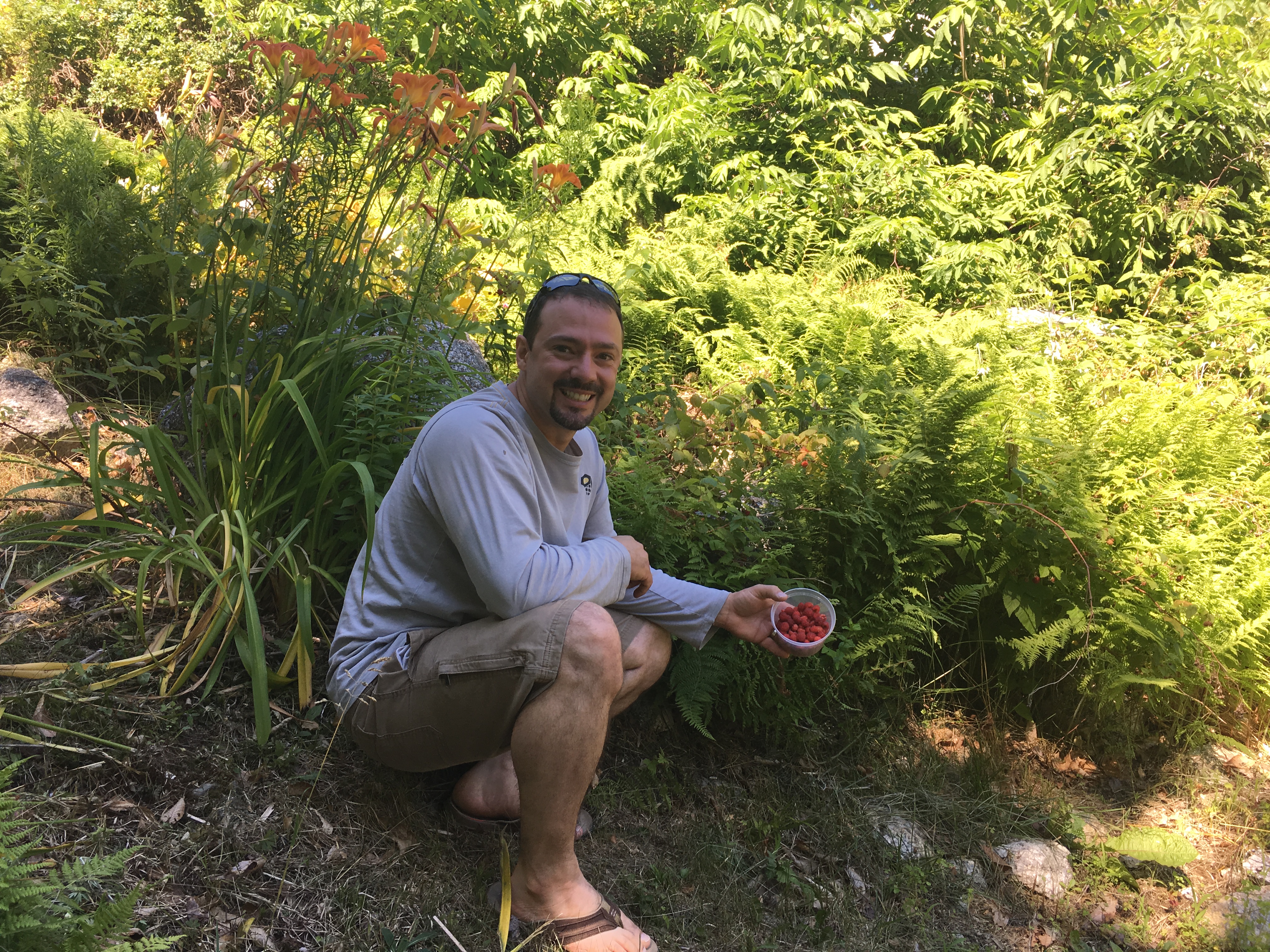 A big enough raspberry harvest for Stephane to make some jam! (Note the long sleeves).

I am fairly certain that Maine has the largest collection of the most irritating, obnoxious bugs around. They bite your skin whether exposed or covered, swarm in your ears, launch themselves at your face, crawl up your legs if you dare to shed your flip-flops, and make it pretty unbearable to be in the great outdoors. 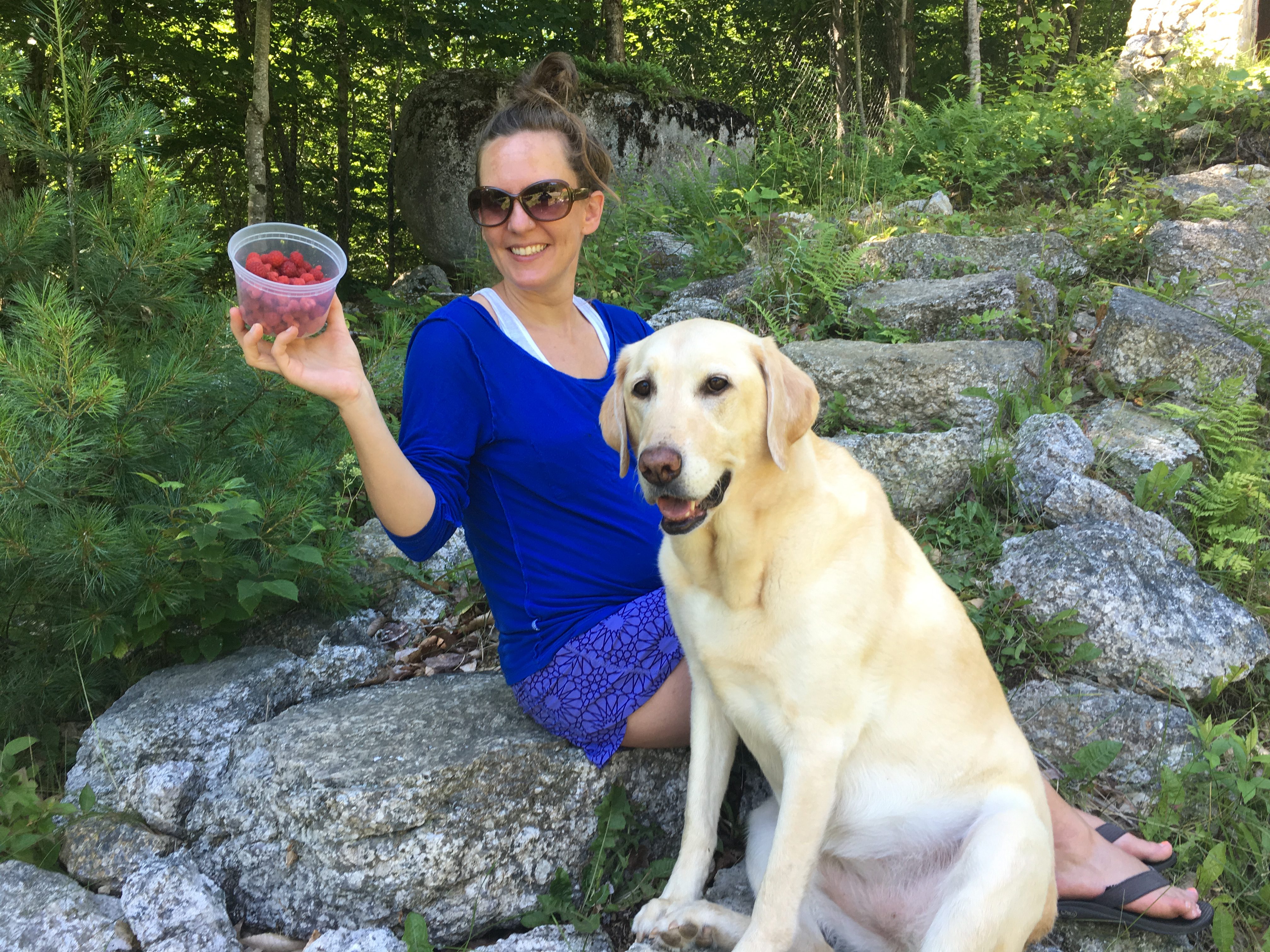 Eschewing all chemicals these days, my form of bug spray is my flailing arms and long-sleeves.

Basically, bugs abound in Maine. And they come out to play hardball in the summer. And they don’t play nice. It’s ironic in a sick sort of way, our little nickname for each other (bug). Little did we know when we first coined our pet name that the word would take on new and irritating connotations in Maine.

In other more upbeat news, mom and dad came out to visit! Among other things, we burned pork in the fire pit and played lots of euchre (girls got crushed by the boys and Stephane’s Swiss Shuffle – he flipped a bower AND had a loner pretty much every time). 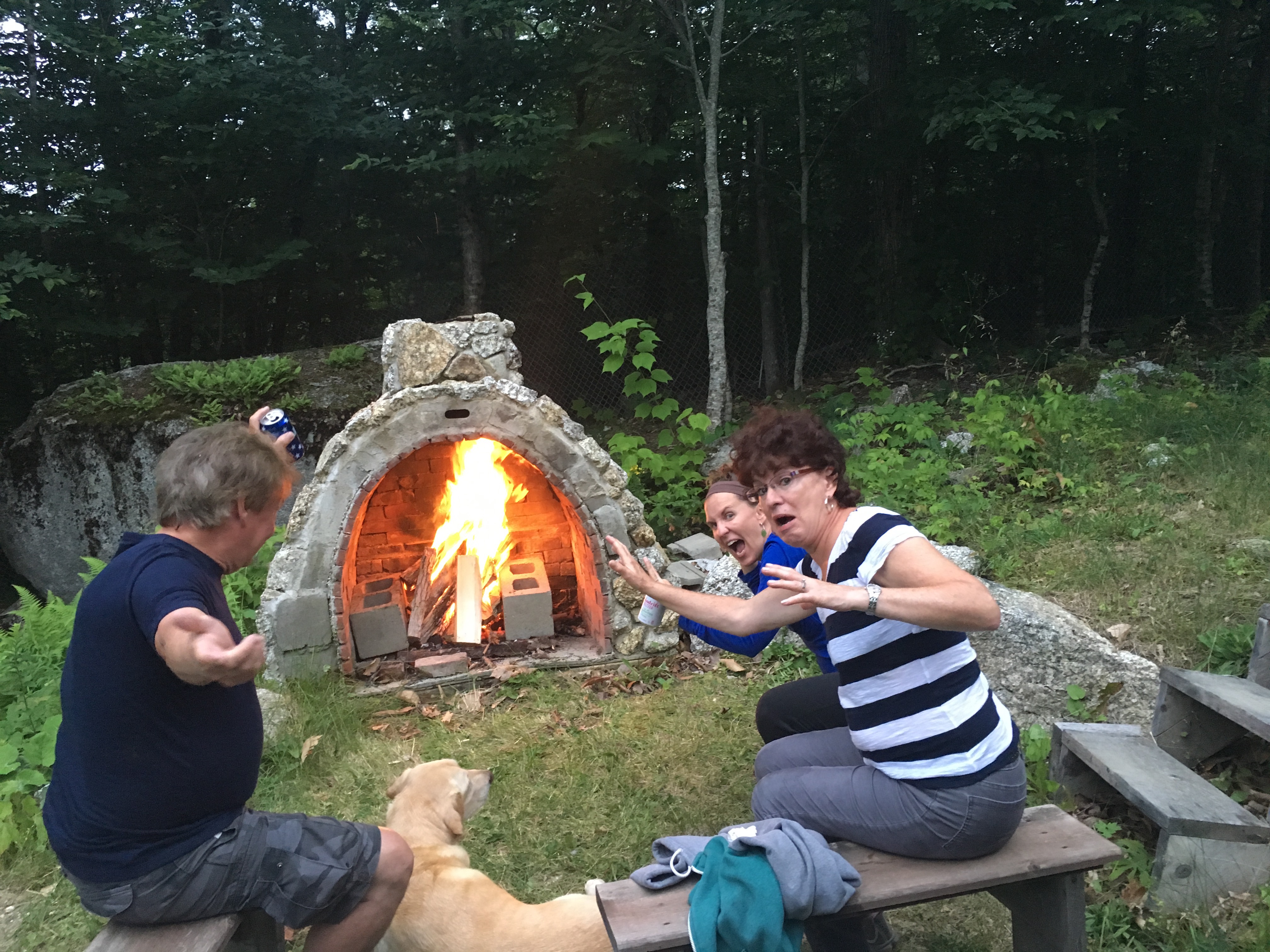 Pretending we’re Daniel circa 1996 when he blew up the chimanea. 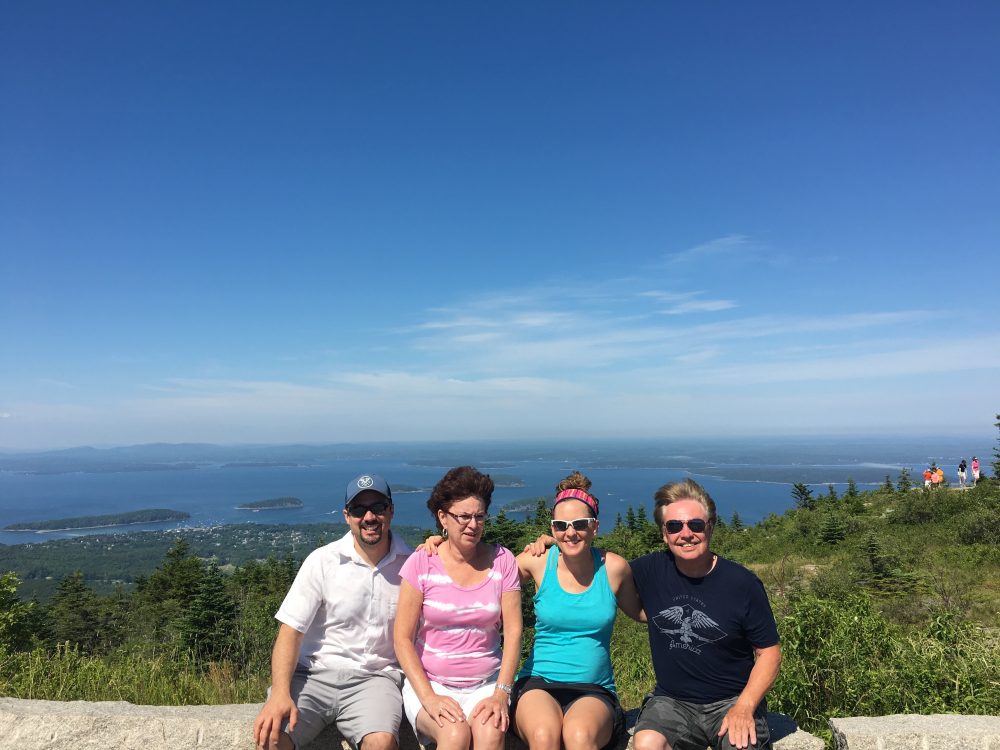 Played tourists for the day at Acadia National Park. Posing at the top of Cadillac Mountain. 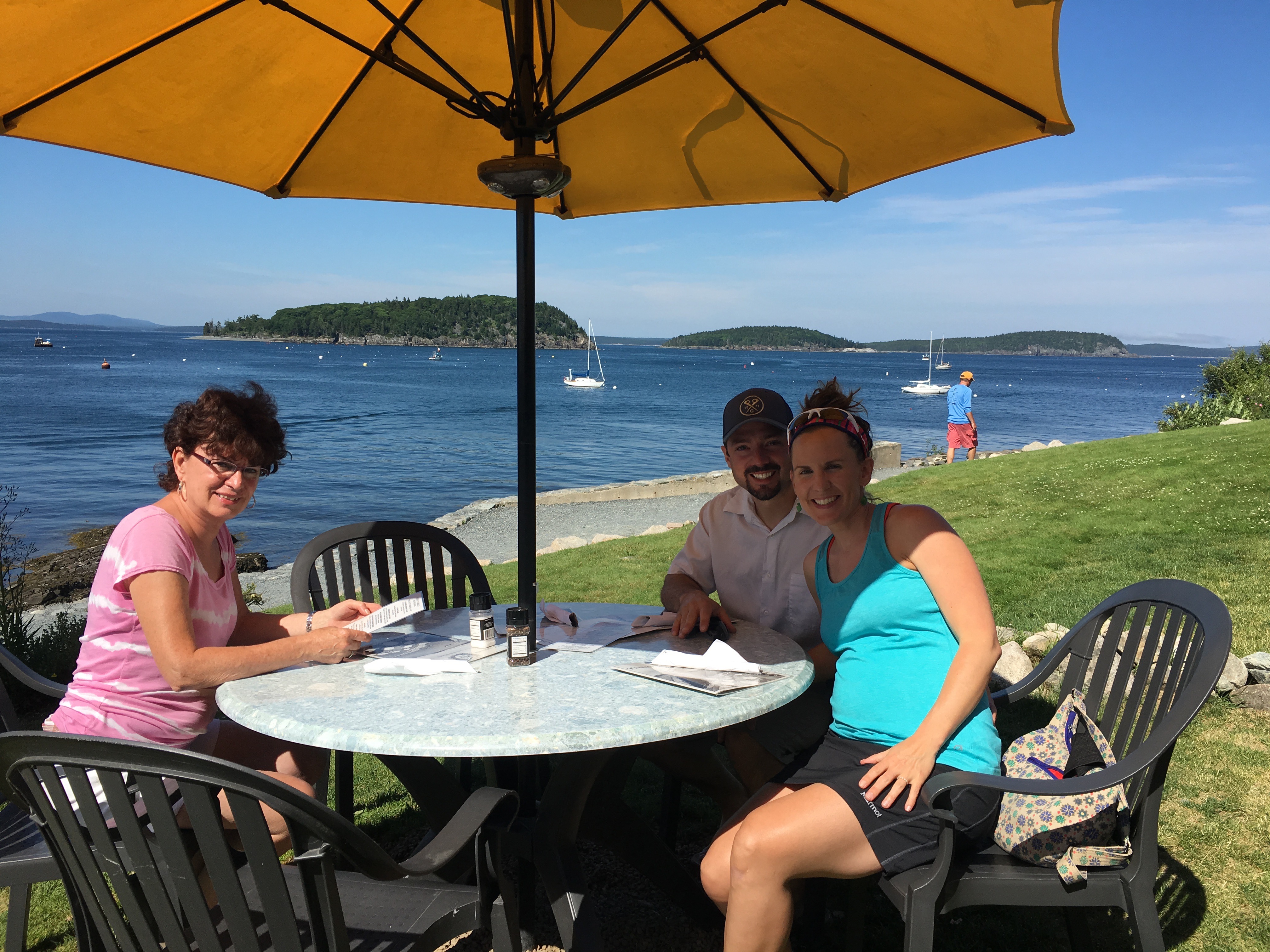 Awesome lunch in Bar Harbor, watching the boats sail by. 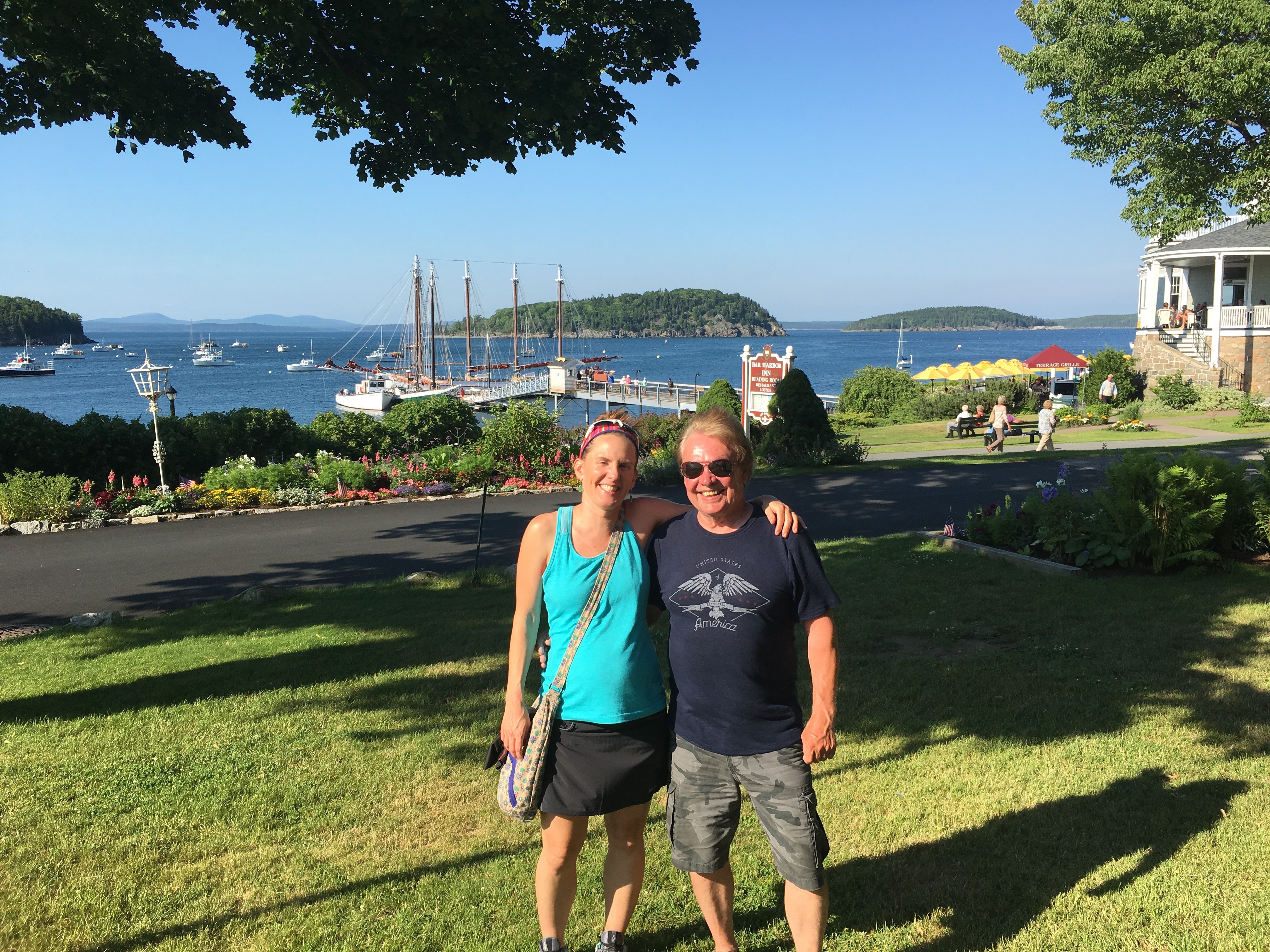 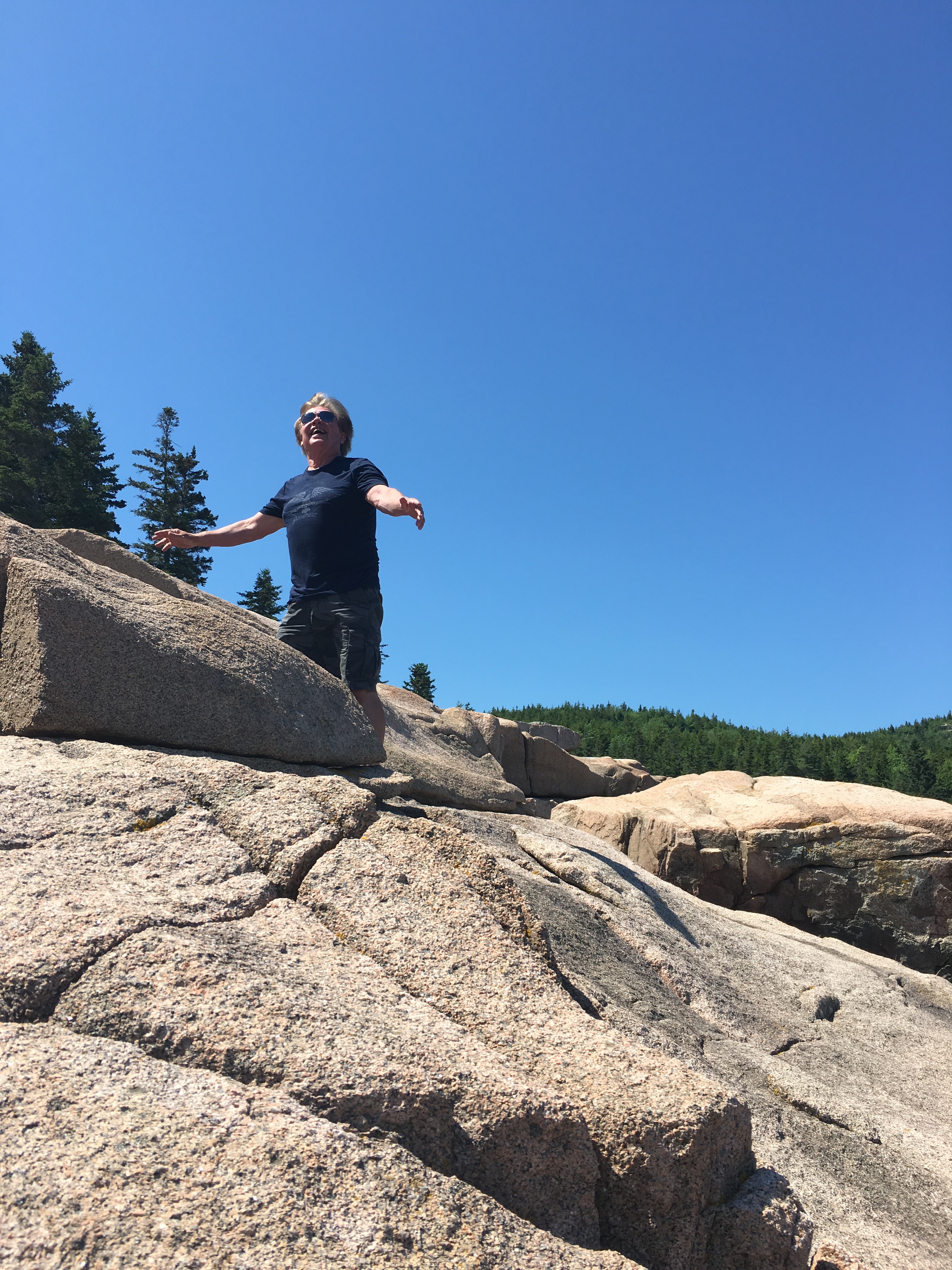 Dad playing around on the rocks near Otter Cliff, overlooking the ocean. 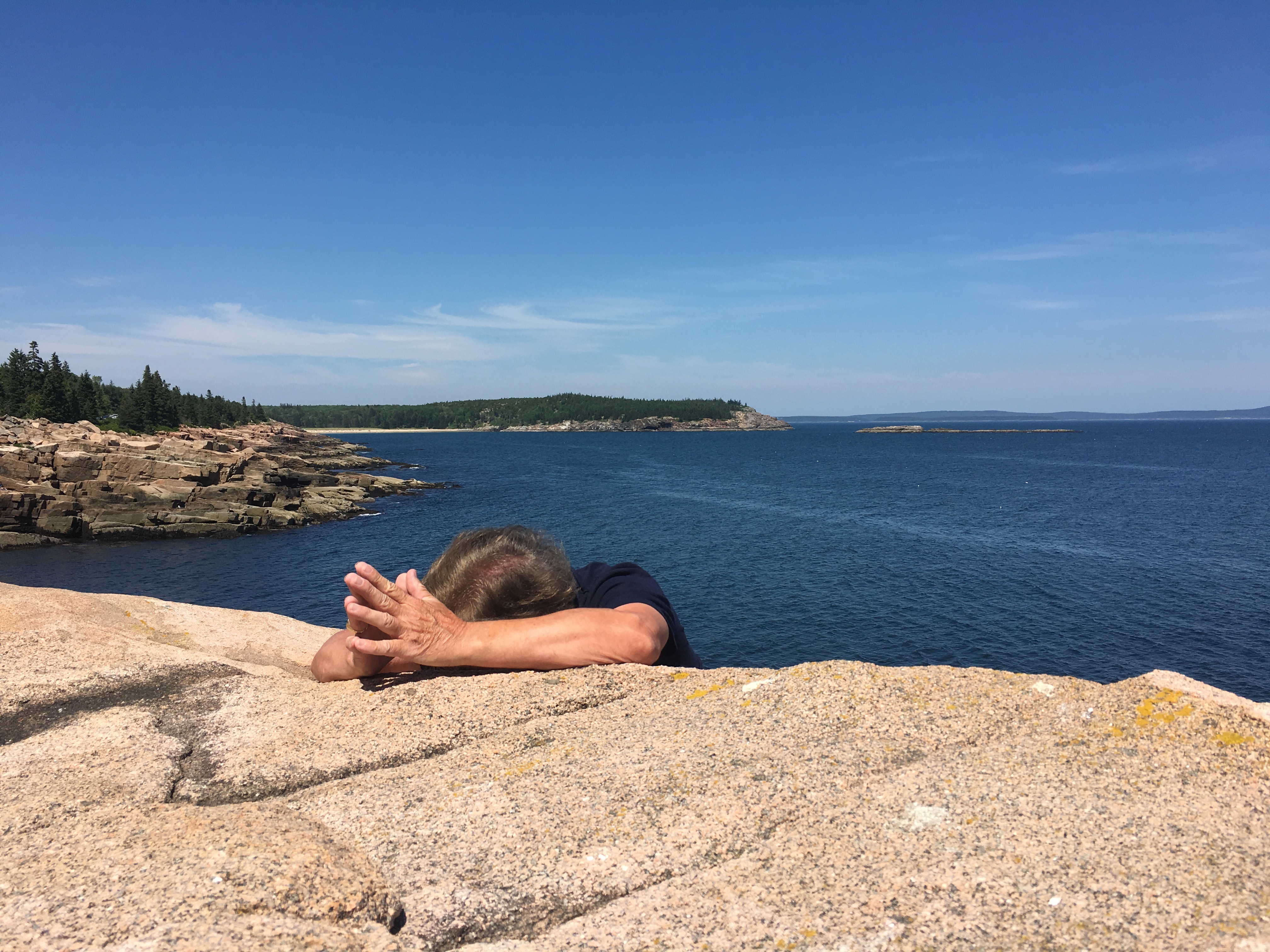 Pretending he’s falling over the edge (because mom’s saying, “don’t mess around! You’ll fall over the edge!!”) 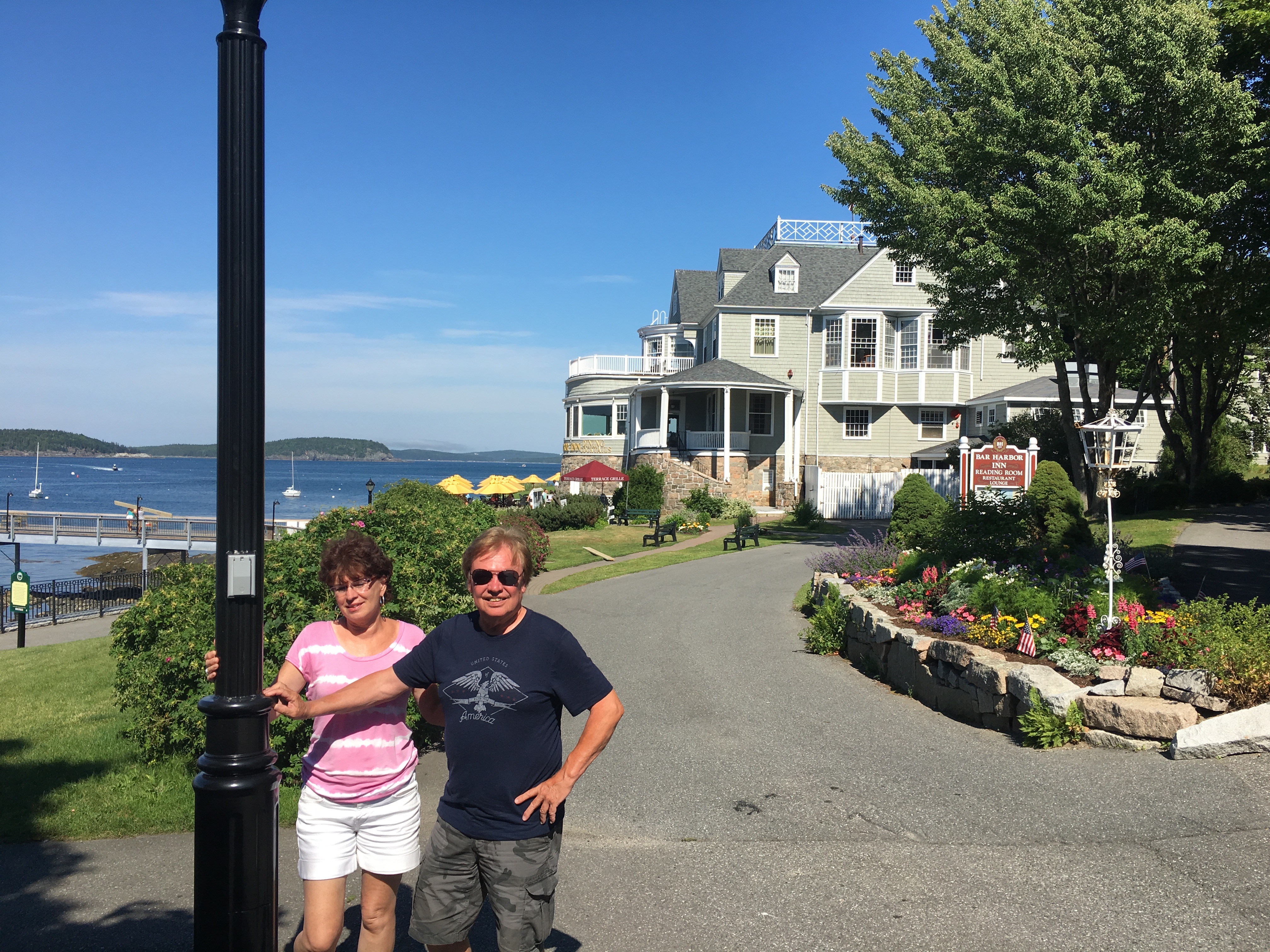 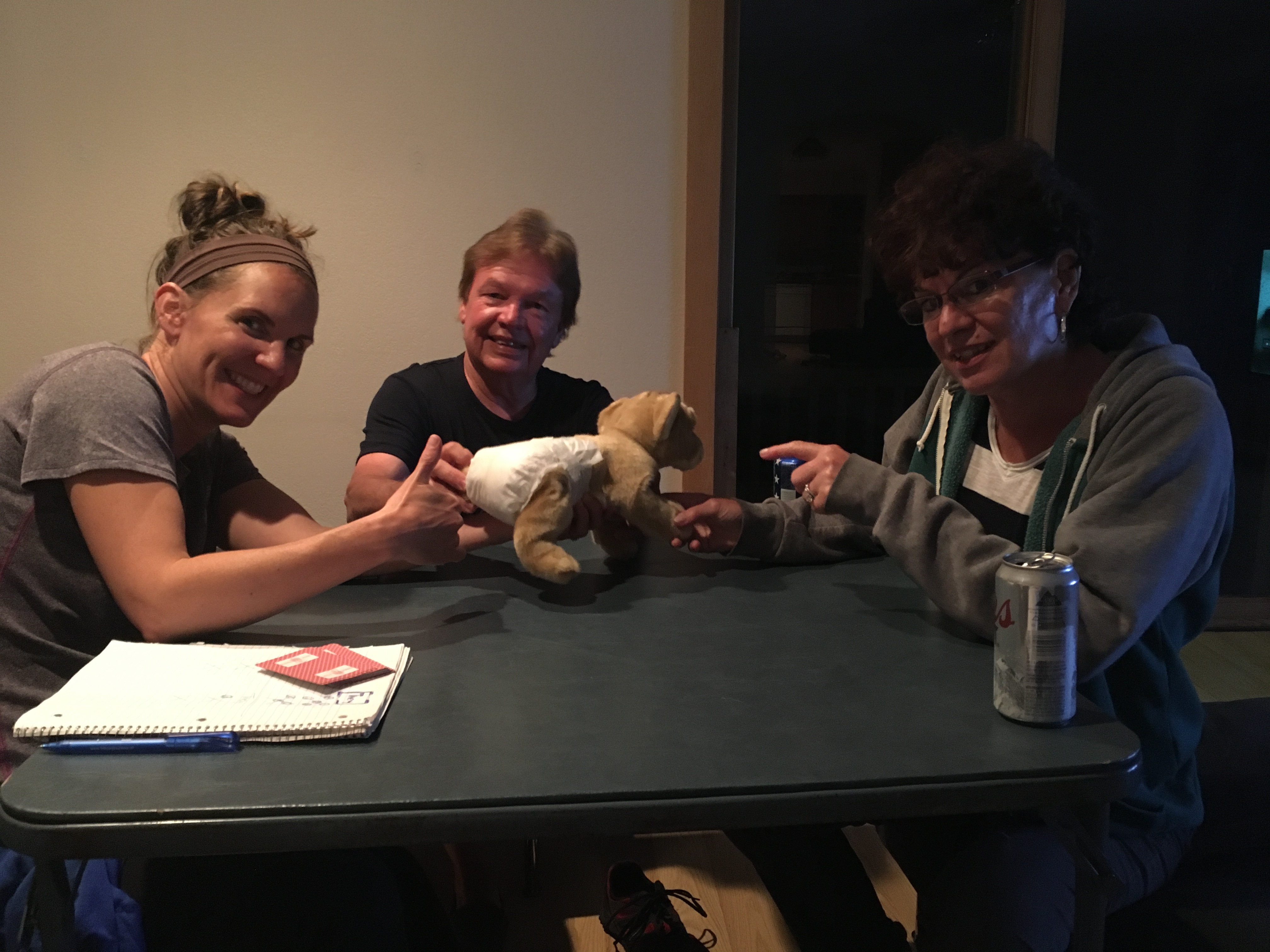 Euchre intermission: a diaper tutorial using Baby Cub (who fits perfectly in a newborn-sized diaper, I might add).

So we’ll see what August brings – perhaps all the bugs drop dead, the temps drop to the seventies, and the humidity lightens – perhaps AUGUST is what everyone was talking about. 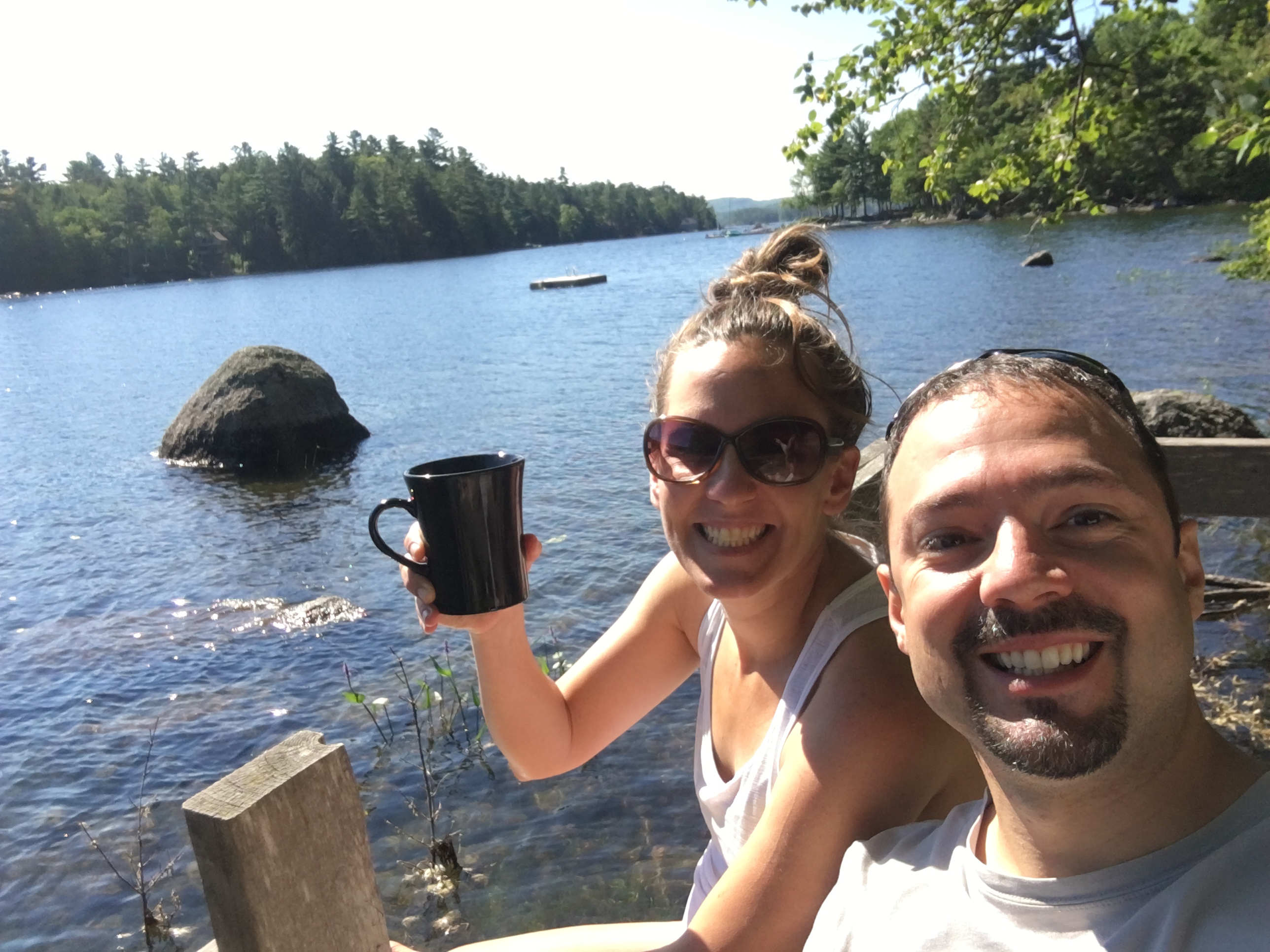 Cheers from Maine! Here’s to August!